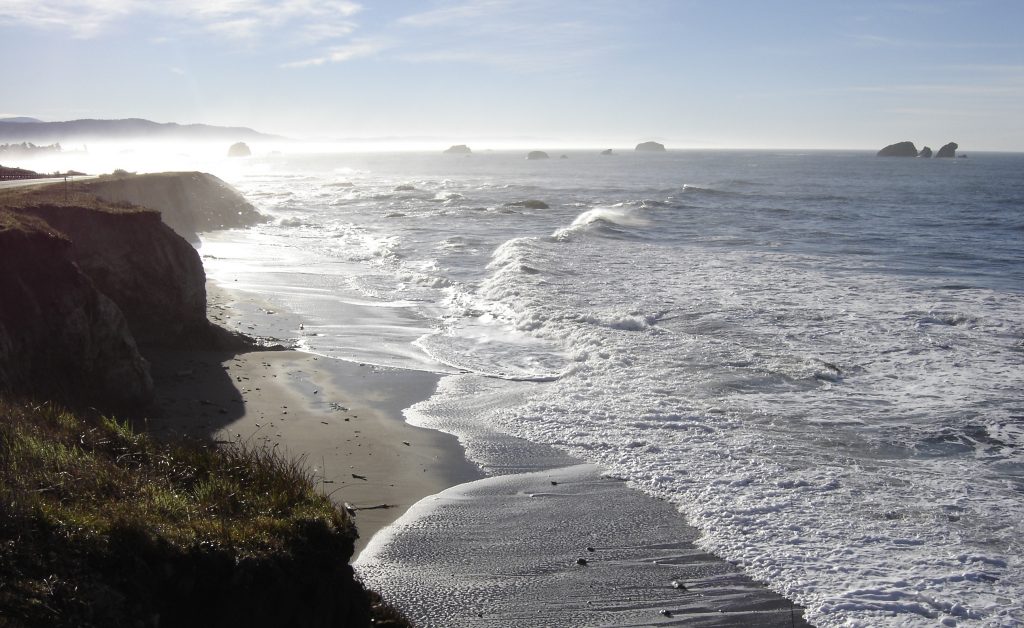 One site consists of a 20 to 25 foot (6.1 – 7.6 m) high cliff comprised of 8 feet (2.4 m) of unconsolidated stiff clay and fill overlying the St. George Siltstone. Field evidence and laboratory testing suggest that the siltstone at this site is non-durable and susceptible to slaking when subjected to wet-dry cycles. Samples subjected to wet-dry cycles from seawater were more durable than samples subject to cycles with distilled water. Slaking of the siltstone degrades the properties of the intact rock making it susceptible to erosion by wave attack. This site is often subjected to “fresh water” wet-dry cycles because it is set back farther from the still water high tide level than adjacent cliff sites. Field observations suggest that those locations where siltstone is continually moistened by contact with seawater are more durable than those subjected to wet-dry cycles – especially from fresh water.

The stiff clay within the upper slope is susceptible to toppling failures and slumps initiated along tension cracks in the stiff clay. Water accumulating in these tension cracks may trigger failure. Debris from these failures generally falls directly to the beach below eliminating any stabilizing effect of the slump debris. Failure in the stiff clay causes the most rapid observable cliff top recession. Failures in the siltstone occur as structurally controlled wedge failures or block falls as the properties of the intact rock mass degrade due to wet-dry cycles. The overall recession rate was 0.28 feet per year (8.5 cm/yr) for the period 1972 to 2005.

Ground nail stabilization measures have been recommended to reduce cliff top recession in the short to medium term.

A proposal was made to construct a single-story 6,000 square foot office building on a portion of an old mill pond in Quincy, California. A two-phase geotechnical investigation was conducted which consisted of test pits and hand-held mini-cone penetration test soundings followed by three hollow stem auger borings with standard penetration testing and undisturbed soil sampling. Consolidation tests were performed on the undisturbed samples thus obtained. Very loose to loose silty sands and sandy silts in the upper 10 to 15 feet of the subsurface coupled with a high groundwater table create a high potential for liquefaction. The area is subject to moderate to high seismicity as evidenced by the moment magnitude 5.2 earthquake that occurred 18 miles (29 km) southeast of Quincy on August 10, 2001. Numerous faults within the region and in close proximity to the project site yield a PGA of 0.19g on rock with a 10 percent probability of exceedance in 50 years. The risk of liquefaction and consequent damage to the structure could only be fully mitigated through densification of the subsurface or the installation of a deep foundation system. These options would be cost prohibitive, in part due to the absence of a competent bearing stratum within a reasonable depth of the ground surface. A geosynthetic reinforced soil foundation (GRF) system was therefore selected to reduce the risk of structural collapse resulting from the large settlements that could occur during strong ground motion while simultaneously increasing the effective bearing capacity of the hydraulic fill under static loading. A GRF design methodology was developed on the basis of increasing the stiffness, and thus limiting lateral displacements, within the GRF mass relative to the in situ soil. The stiffened soil mass then distributes applied foundation loads over a larger area than an unreinforced soil mass thus decreasing the bearing pressure on the loose silts and sands.

This paper presents the case history of a natural slope, about 10 meters in height, in a sensitive, low plasticity, glaciomarine clay near Portland, Maine. The area in the vicinity of the slope has a history of landslides. A field and laboratory testing program was conducted which included field and laboratory vane shear (VST), triaxial, and consolidation tests. Based upon regional geotechnical practice, the low undrained shear strengths measured behind the slope using the VST result in a stability factor of safety of 0.64 indicating failure for undrained conditions. However, the observed stable slope performance indicates that the actual factor of safety must be greater than unity. Regional geotechnical practice generally does not use corrections for measured su(FV) values in sensitive glaciomarine soils. Application of Bjerrum’s (1973) anisotropic correction to the su(FV) measured at the site and considerations of stress history result in a computed factor of safety which is more consistent with the observed field performance of the slope. The application of VST anisotropic correction factors is recommended for future undrained stability analyses in this material. 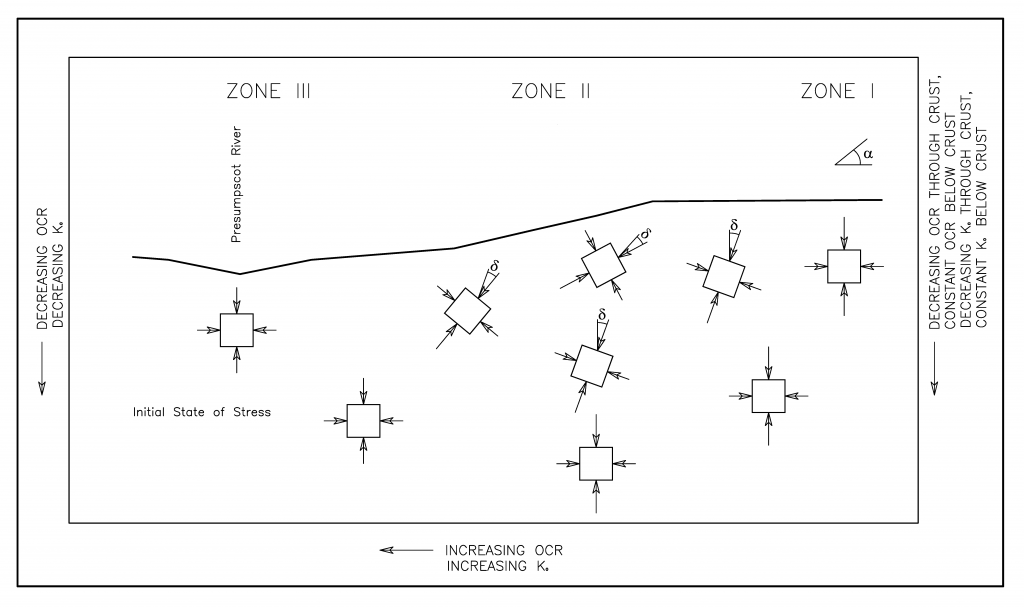 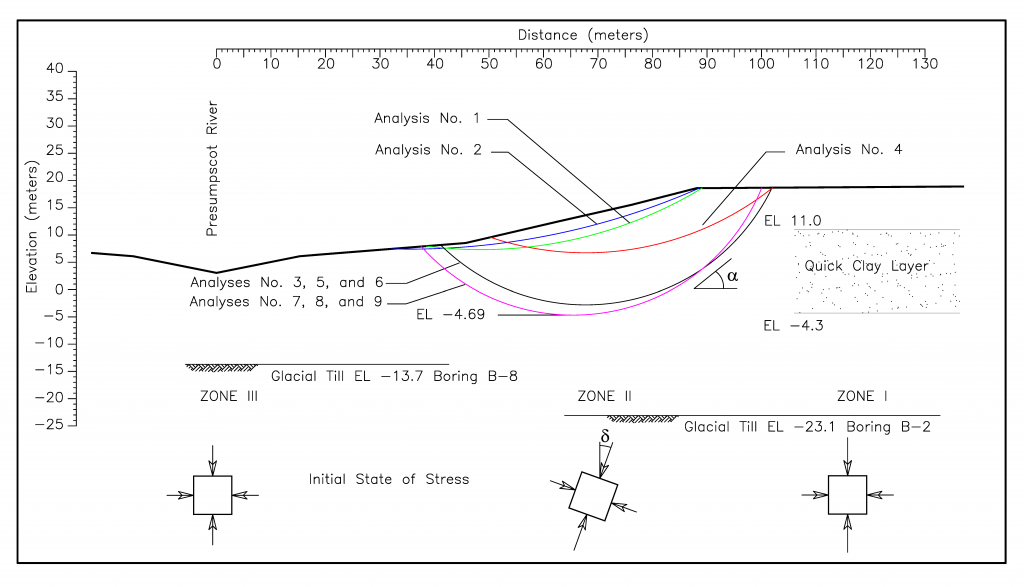 Landslides Under Static and Dynamic Conditions – Analysis, Monitoring, and Mitigation, Geotechnical Special Publication No. 52, Proceedings of the Session on Landslides at the ASCE National Convention, San Diego, California, October 1995. 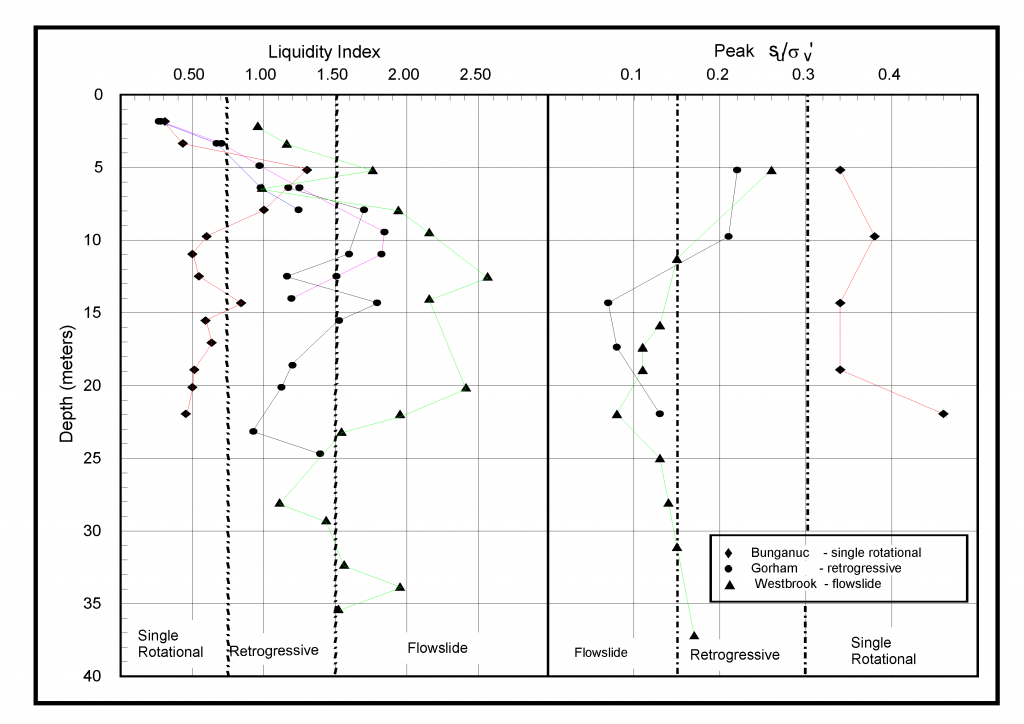